Normally, when I think back to the history of the 20th century, one of the first words that come to my mind is “chaos.” Sure, the 20th century was a time of great achievement in politics, wealth, and technology, it was also a very chaotic time.

Starting from the assassination of President McKinley in 1901 all the way up to the impeachment of Bill Clinton and the fall of communism, the 20th century, in America and the rest of the world, was full of chaos and unrest. Coming out of the seemingly pastoral times of the 19th century, the nation has been gripped by political strife, tremendous economic difficulties, and many wars. Two world wars, even.

Throughout this time, we, as the greater extent of humankind (in the developed world, at least) try to make sense of all the chaos in our lives through various channels. These mediums can be anything from books to television, to movies, and to plays. It doesn’t really matter as to the specific medium, just the idea has to translate and unite many different peoples. Sometimes, dealing with chaos can lead to a dive into very heavy topics, particularly in film. These can include Saving Private Ryan‘s depiction of World War II or The Deer Hunter‘s look at what can happen to desperate men with little hope in their lives. Sometimes, the stories are serious, sometimes they are not. 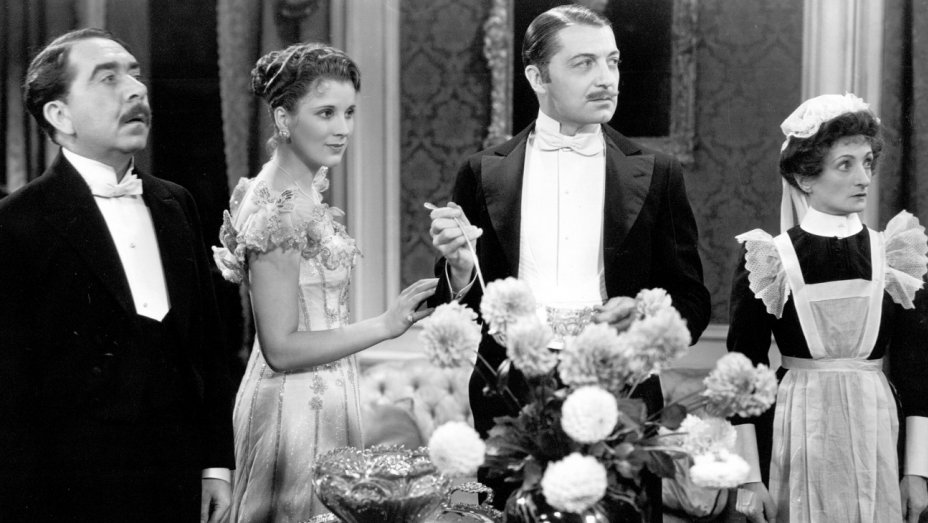 This week’s film, Cavalcade from 1933, is Frank Lloyd’s attempt to make sense of the world in the first 33 years of the 20th century. It follows two families, the aristocratic Marryots and the working class Bridges as they attempt to deal with massive changes both at home and abroad.

Obviously, the film’s biggest backdrop, in my head, at least, is the crippling effects of the Great Depression on the world stage. By the time the movie came out, Franklin Roosevelt had just come to power and was trying to bring order to the situation. In the meantime, though, life was very hard for most Americans.

At a time like this, hope can appear to be some point on a distant horizon, relief a universe away. This was a great time for Hollywood, as the studios cranked out uplifting, funny, and hopeful movies to steer to the masses. Cavalcade is one year before the classic from Frank Capra, It Happened One Night. And it joins the list of other feel-good movies like Grand Hotel and You Can’t Take It With You. Cavalcade is not unlike those movies. Diving headfirst into heavy topics but always glossing over the real toll they may take on human life.

Now for the rest of the movie.

Cavalcade‘s story is very broad and very wide from the beginning. The movie starts in London in 1899 during the Second Boer War. The men in the Maryott family (Robert Marryot, the father, played by Clive Brook) and the Bridges family (Alfred played by Herbert Mundin) are about to head off to basic training so they may fight for Britain. The war taxes both families and the wives (Jane, played by Diana Wynyard for the Maryotts and Ellen, played by Una O’Connor for the Bridges) are relieved when it comes to an end years later.

From there, the story touches on many different points in history including the death of Queen Victoria in 1901, the sinking of the RMS Titanic in 1912, and the Great War from 1914 to 1918. Throughout all these events, the families become entwined with each other, as well as with the train of world events as a whole.

Checking in at just a little less than two hours, Cavalcade has a plot that is very much similar to Gentleman’s Agreement. The plot struggled to keep my attention. In fact, I felt that during the first 75 minutes of the movie, I was struggling to find where the story actually began. But, unlike Gentleman’s Agreement, this one continued to fade over time and I was happier that it ended, rather than sad. 0.

Based on the play of the same name by Noel Coward, Cavalcade‘s screenplay was adapted for the screen by Reginald Berkeley.

This film is like most other movies of the decade and beyond, full of short, pithy commentary. But the writing also takes on a distinctly British tone with dry British humor. However, the movie is also a haven for dramatic cliches that almost make it laughable in and of itself. 0.

Utilizing a wide array of music, Cavalcade brings sonic “bigness” to the screen. Peter Brunelli, Louis De Francesco, Arthur Lange, and J.S. Zamecnik all collaborated on the score for the film. In general, the score is upbeat, bringing light to most situations.

A number of scenes take place in various theatres at different times. Much like The Great Ziegfeld, the shows are well-produced and have catchy tunes. Thankfully, though, the sets are not nearly as expansive or decadent during these shows as The Great Ziegfeld. 1.

Cavalcade did receive an Oscar for Best Art Direction and it’s not hard to see why. In general, films from the 1930s have very basic sets, shot on soundstages. Now that’s not to say that there aren’t portions of this film shot on the soundstage or that most scenes aren’t in a studio’s backlot, however, these just feel different. 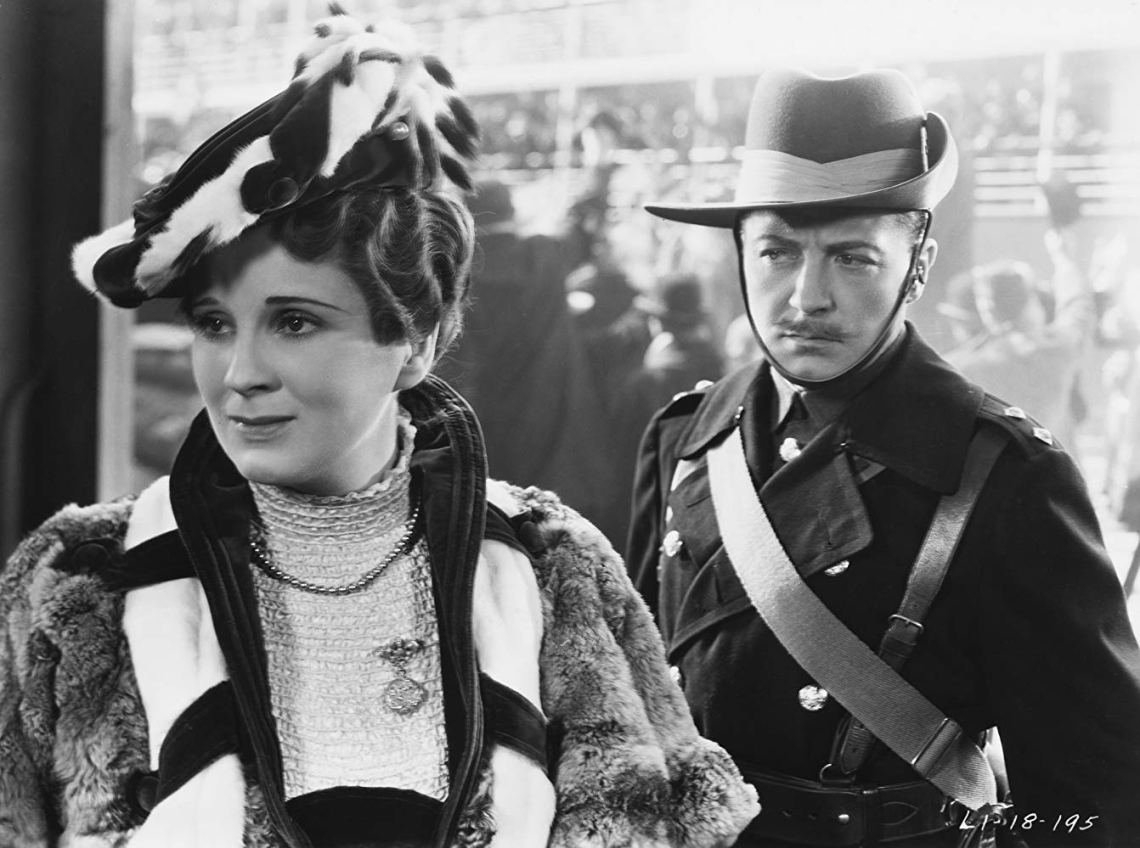 Cavalcade is an ambitious try at illustrating a world and the set nails it. The first word that came to mind when I was looking at the set was “expensive” and it surely one. Greatly detailed and immersive, the set is one of the few shining stars of the film. 1.

Cavalcade is presented as a simple story in a complex time. To reflect that, the shots in the film are simple themselves, relying on their actors to tell the story. Most shots are medium long shots generally cutting actors off at the belly button. The film has the classic 1930s push and pulls, slowly moving the camera to the action. There are few pan shots where the camera pivots on the tripod to follow the action. 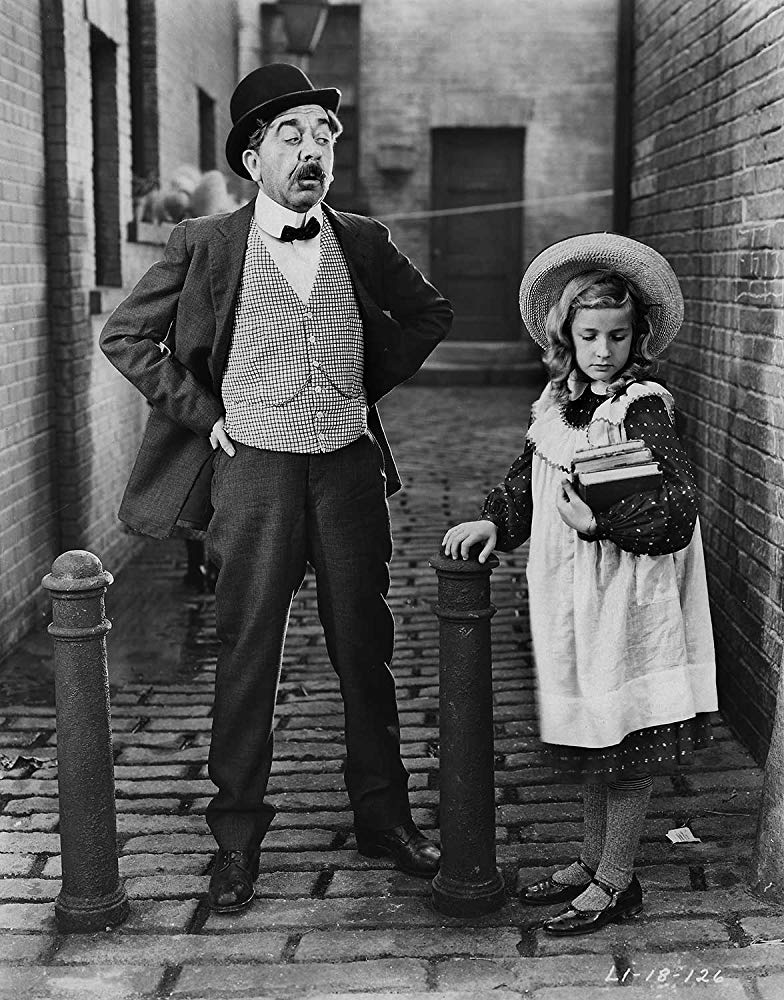 One particular scene of note, though, is the film’s depiction of World War I. For several minutes, the war years fly by as a simple static shot of a French town that becomes more and more destroyed as the montage goes on. Overlayed on that shot are many different shots of Zeppelins, marching soldiers, but the most effective are those shots of the soldiers themselves. We only see them from the neck up and the soldiers are looking directly into the camera while their faces display varying degrees of anguish and horror at the war. 1.

For all the categories in this film, this one is probably the most difficult to write about. Each of the characters are all equally as important, and yet they’re on the screen for generally the same amount of time.

Diana Wynyard and Clive Brook star in the film as Jane and Robert Marryot. These two are most likely the film’s centerpiece, with the movie bookended by their scenes. The movie begins with their New Year’s toast on December 31, 1899, and ends with their similar toast as an elderly couple on December 31, 1932. The pair has seen so much change and destruction in their lives. Robert sees it first-hand as he leaves Jane to fight in the Second Boer War in South Africa. Although he returns safe and sound, he’s a man forever changed by his military experience. Jane, on the other hand, is fraught with grief and despair when her beloved Robert goes off to fight the war. After his return, her time is largely over.

The pair ends the movie with no children as their first son perished during the sinking of the Titanic and their other during the first world war. However, it is Robert and Jane’s continual looking forward to the future that helps keep their marriage together.

Una O’Connor and Herbert Mundin play Ellen and Alfred Bridges. In the beginning, Ellen and Alfred are servants in the Marryot household. Alfred, like Robert, leaves to fight in the war. After he returns, a wedge is driven in their marriage when he reveals he purchased a pub from a war buddy. The stress of running the pub, and the slow decay of their marriage, eventually lead to Alfred’s drinking habit and he’s in a fatal accident in 1908. Still, though, Ellen keeps her hope alive and lives somewhat through her daughter Fanny, who has made a name for herself in dancing.

At the end of the day, each of the characters is not developed, nor are many of their emotional tendencies explored. Jane and Ellen are distraught while their husbands are at war to be sure, but they’re only like that because they have to be. I felt no connection to any characters during this film and was not overly upset when some of them died. 0.

Frank Lloyd won the Best Director Oscar for this film in 1933. However, I don’t agree with the Academy.

Cavalcade is a film that is full of so much potential. This is a movie that tells a story spanning generations and how subsequent generations are shaped and grow from the events in our chaotic world. It has the chance to explore deep questions about modern human experience.

Yet the potential remains untapped and the film fails to capture the nuance of life and our dealings with death and grief. Lloyd breezes over these experiences and just simply moves on to the next topic. While the film may have had a powerful impact on viewers from 1933 (indeed it did as it was the second-highest grossing film that year) it didn’t capture my imagination in 2019. When I was contemplating writing about this film I stared at the blinking cursor on the screen for several minutes before it hit me: Cavalcade is not exceptional where it counts. It lacks real emotion and vigor. This realization is the most damning: someone who loves film like I do can’t even think of the impact the movie had on me. 0.

Oscar Facts
Cavalcade won the 6th Academy Award for Best Picture on March 16, 1934, at the Ambassador Hotel in Los Angeles. It beat out 42nd Street, A Farewell to Arms, I Am a Fugitive from a Chain Gang, Lady for a Day, Little Women, The Private Life of Henry VIII, She Done Him Wrong, Smilin’ Through, and State Fair for Best Picture. The award is the only Best Picture ever given to a Fox Film Company production, as Fox would merge with 20th century a year later. In total, Cavalcade received four nominations and won three awards.

Other winners that night included Charles Laughton winning Best Actor for The Private Life of Henry VIII and Katharine Hepburn winning Best Actress for Morning Glory. The ceremony was hosted by Will Rogers.

We stick with Frank Lloyd for next week’s film, Mutiny on the Bounty. After that, it’s Shakespeare in Love, All About Eve, Marty, Chicago, and Going My Way.

View all posts by Keltin