Outside of the American Revolution, there is no other period in American history that is subject to so much embellishment as the westward expansion of our continent. Buffalo Bill and Billy the Kid take a back seat to George Washington riding a bald eagle into battle wearing aviators with a bazooka in one hand is understandable, for sure, but I think you get my point.

No, westward expansion had as many colorful characters as a giant box of Crayolas. Therefore, the written history of this era was almost doomed to be nothing but legend right from the start. There are too many tall tales to even try to count. When it comes to movies about the American west, there are two very different, yet very complex, ideologies that come from this era in history: the west as an idea and the west as place.

When I wrote about Dances with Wolves a few weeks ago, I wrote about a hard, gritty and truthful movie that, at the very least, helped to perpetrate the idea of the west. It was a hard movie to watch and not feel inspired to travel or to start some grand adventure. That’s not to say that it didn’t have a great message, though. It forced us to look at the way that Native Americans were brutalized by westward expansion. But with Kevin Costner’s open landscapes and romantic ideals, this film is a great example of the embellishment of the idea of the west.

Clint Eastwood’s 1992 Best Picture winner Unforgiven establishes the notion of the west being a physical place in ways that most other westerns do not. Eastwood’s first of two Best Picture films hits you right where it hurts time and time again and manages to throw you into the fray during its 130-minute run time. 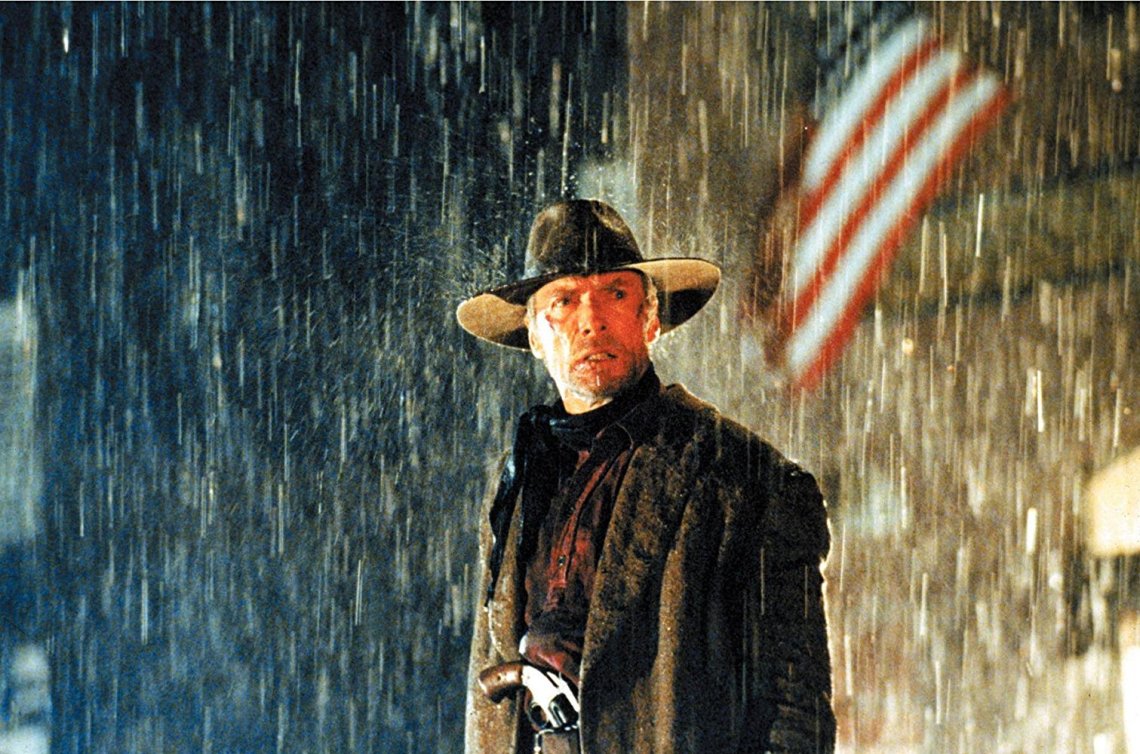 To say that the film is gritty is an understatement. This movie give us a look inside the American west, not just a chance to admire it from afar. Unforgiven sets a new tone for westerns and I loved watching it.

Now, for the rest of the film:

Plot
Clint Eastwood produced, directed, and starred in the film. He plays William Munnie, a retired gunslinger, current widower, and terrible hog farmer on the Kansas plains with his two children.

One day, he gets an interesting offer from the young Schofield Kid (Jaimz Woolvett) to help him take down a couple of rough cowboys for $500. He desperately needs the money. He hesitantly takes the chance but only for the opportunity to give his children a better life.

Along the way, he recruits his old partner, Ned (Morgan Freeman) and the three killers ride to the town of Big Whiskey in western Nebraska. The sheriff in that little town is Little Bill Daggett (Gene Hackman). Bill rules this sleepy town with a power-hungry iron fist. 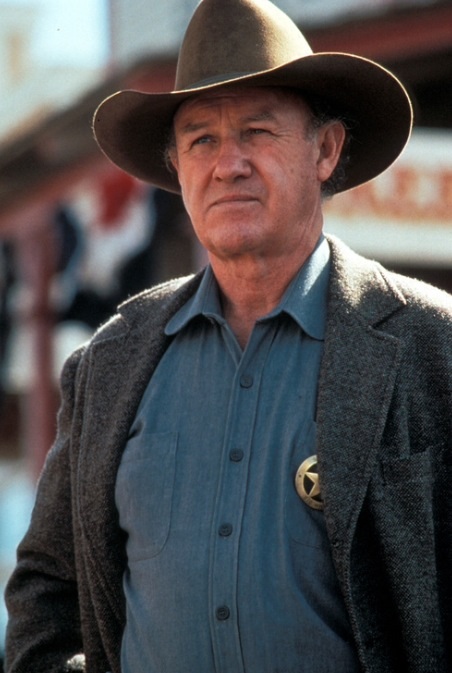 Perhaps the most interesting bit about this plot is the slow progression of its conflict. It takes its time to develop, fleshing out every weakness and strength of the characters. Getting to know Munnie and Daggett individually sets up an amazing conclusion to the movie that left my jaw dropped to the floor. 1.

Writing/Dialogue
David Webb Peoples wrote Unforgiven and the script earned him an Oscar nomination at the 65th Academy Awards.

Like all other historical movies, there has to be special attention to the dialogue. As a writer, fitting the script to the era is a must. But you also have to stay true to each character, and this isn’t easy to do.

As I’ve mentioned before, this movie does an exceptional job of putting you at street level in the west and the script is a huge part of this. The writing is very colloquial, informed, and lazy. The cowboys speak like you’d expect a cowboy to.

But the writing is more than that. This is the rare film in which the words of many characters, particularly Munnie, do speak louder than the actions of those characters. Munnie is most passive and secluded in himself and he relies on the scant dialogue he provides to establish his character, which is, for the most part, unusual. 1.

Sound
I have a degree in electronic media. That’s why I can drone on and on and on for 2,500 or so words about a movie every week and not get bored. But it also means I have a more than basic understanding of how video, with a mixture of audio, impact our movie experience. Good video is two-thirds audio. 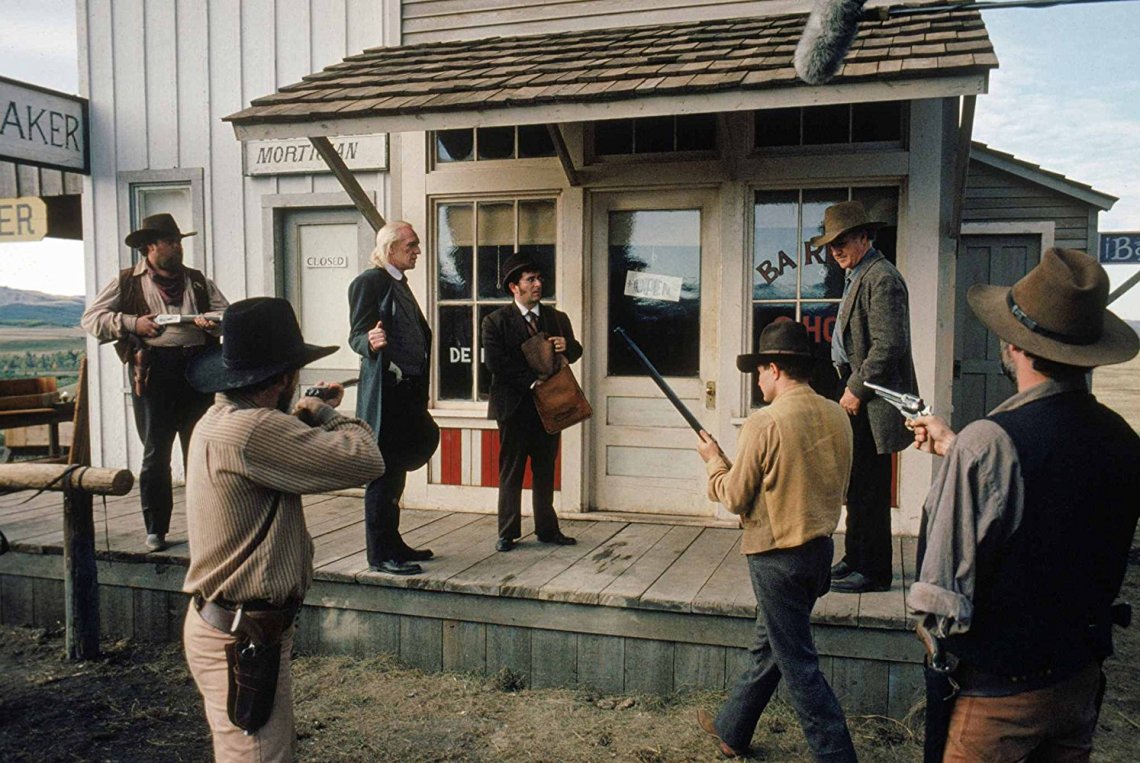 Think about this, and then try a little experiment: pause for about thirty seconds, close your eyes and listen to everything around you. You’ll be able to hear it and discern it all to varying degrees. Your brain interprets sounds in amazing way that it can’t with sight. You can only really look at one thing at a time.

All of this is to say that great sound adds so much depth to a film, more than we even realize. In Unforgiven, this sound is done exceptionally well. This is evident in the number of times that it rains in the movie. Yes, I’m freaking out about RAIN. One of the best examples is actually during the movie’s tension- and bullet-filled climax. I won’t give anything away, of course, but the scene is during a torrential downpour. And there’s nothing more badass than Clint Eastwood shooting his way past a bunch of desperadoes while rain pitter patters on the saloon windows. 1.

Set
Taking place in the late 19th century, Unforgiven follows a small but hardy cast of characters trying to find their way in the rugged expanses of Kansas and Nebraska. These people lived basic lives and the sets reflected that. But, that doesn’t mean that the sets were simple themselves. They were the opposite in fact, but some of the most detailed and beautiful set pieces I’ve seen thus far.

First of all, the physical location is amazing. The movie was shot primarily in Alberta and the locations could not have been more perfect. Scarred landscapes with mountain and gently rolling grasslands left the set open to so many possibilities.

Second, the detail in the set were great, too. Unforgiven takes place in the little town of Big Whiskey. This town was basically built from scratch and it was awesome. The set was amazingly detailed, right down to the soot on the ceilings above the kerosene lamps. 1.

Cinematography
When it comes to westerns, there haven’t been many of them to grace the Academy stage as winners. Cimarron (1931), Dances with Wolves (1990), and Unforgiven are the only three to ever do it. I’ve reviewed two so far, each with different ideologies of the west, as I’ve previously mentioned.

Yet, one thing they share is their beautiful open expanses of prairies and nothingness. This make for some stunning vistas along the way. Therefore, the technical aspects of shooting Dances with Wolves and Unforgiven are generally the same. But, the cinematography purpose was very different and it has to do with what I mentioned earlier: the west as an idea and as a place. 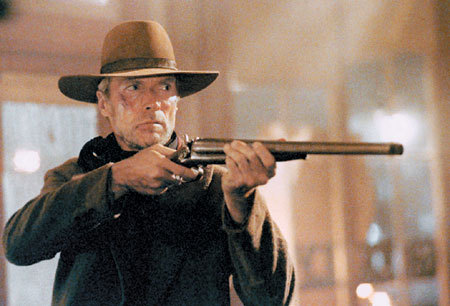 Because of Dances’s grandiose vision, the landscape was a major character. However, this wasn’t the case in Unforgiven. The scenery and the artistry of each shot is beautiful, to be sure, but it’s that way just because the scenery is beautiful, not because it was forced to be. 1.

Acting
Unforgiven centers on the journeys of three men, Will Munnie, Sheriff Little Bill Daggett, and Ned Logan. I’m going to focus on Will (Eastwood) and Daggett (Hackman) here, but let there be no mistake, Morgan Freeman turned in a great performance as well.

Eastwood plays Will Munnie, a former crazed gunslinger and current widower who is struggling to make ends meet while also struggling at raising children and hogs. When we meet him, he’s without a thirst for life, having been defeated by circumstance and the death of his beloved wife Claudia.

After the Schofield Kid pays his visit, Will still struggles with his motivation and is still in a deep depression. Yet, he’s still driven by something buried deep inside. He represents an older and more violent time in the west and he doesn’t fall into the very human trap of believing that the “good ole days” were better than any other days. In fact, he’s weighed down by a dump truck of shame for his past and sorrow for his present. But he gets his groove back slowly. He’s got a chance to be the white knight at one point in the film but he reject that notion. It saved the movie from become like all other westerns. He rejects any goodness in him and succumbs to fear, doubt, and self-loathing. Needless to say, Will Munnie is insanely likable. 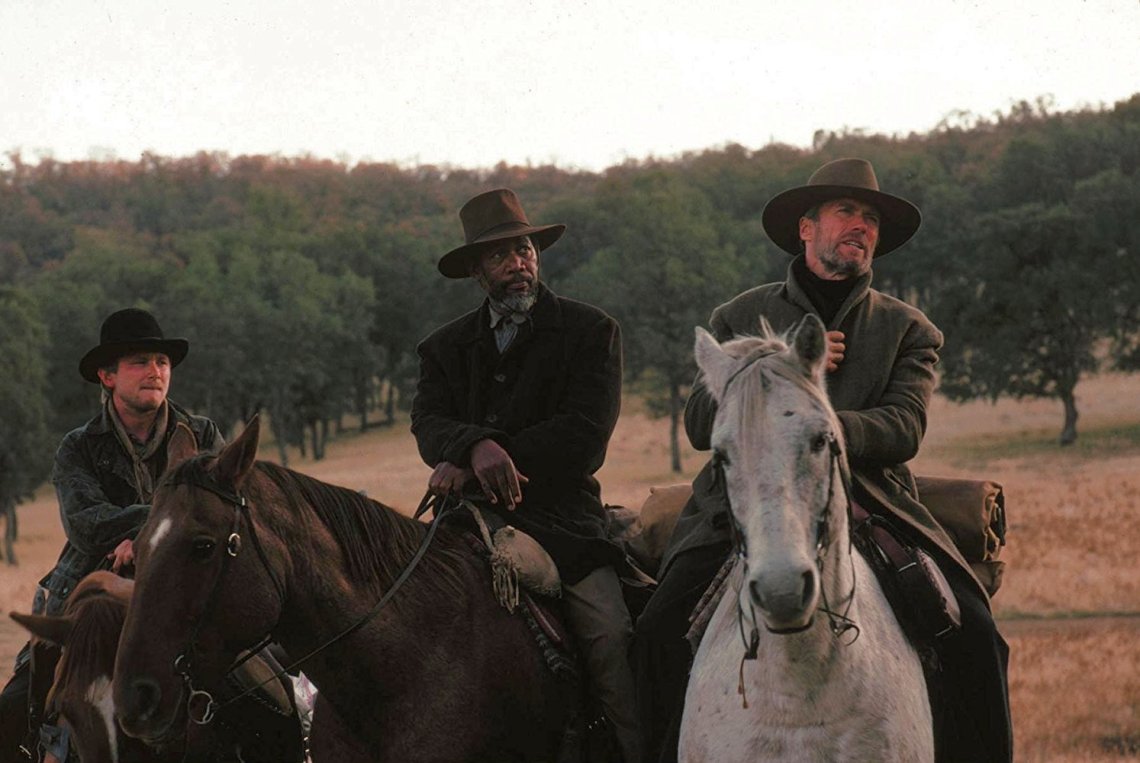 Gene Hackman plays Daggett, the maniacal, power-hungry sheriff that has a soft spot in his heart for sheer brutality. While Will has remnants of a soul that he gradually mends back together, Little Bill has no soul at all. Instead, he chooses to fill the black void with arrogance and a thirst for depraved torture. Hackman plays this beautifully, though, bringing a charisma to Little Bill that is both eerily lovable and also terrible.

Little Bill often goes on long monologues about his exploits and reinforces how many human lives end with his cruelty. He’s the new west, suppressing any opposition to him with excessive force. He’s determined to bring order to a lawless land and he won’t stop until he has it. 1.

Directing
Unforgiven earned Eastwood his first Best Director Oscar and for good reason. He didn’t set out to make your grandfather’s western. Hell, he didn’t even want to make it like one of his own westerns from the past.

Instead, there’s no good versus evil here; we as the audience is left with the best bad choice. Unforgiven forces us to rethink what we believe the west was and west means. It’s the story of a man struggling to outrun him demons. Yes, you can put a man in a sea of grassland and under a dome of brilliant blue skies, but that’s not what defines the man. It’s his constant war against himself that defines him. 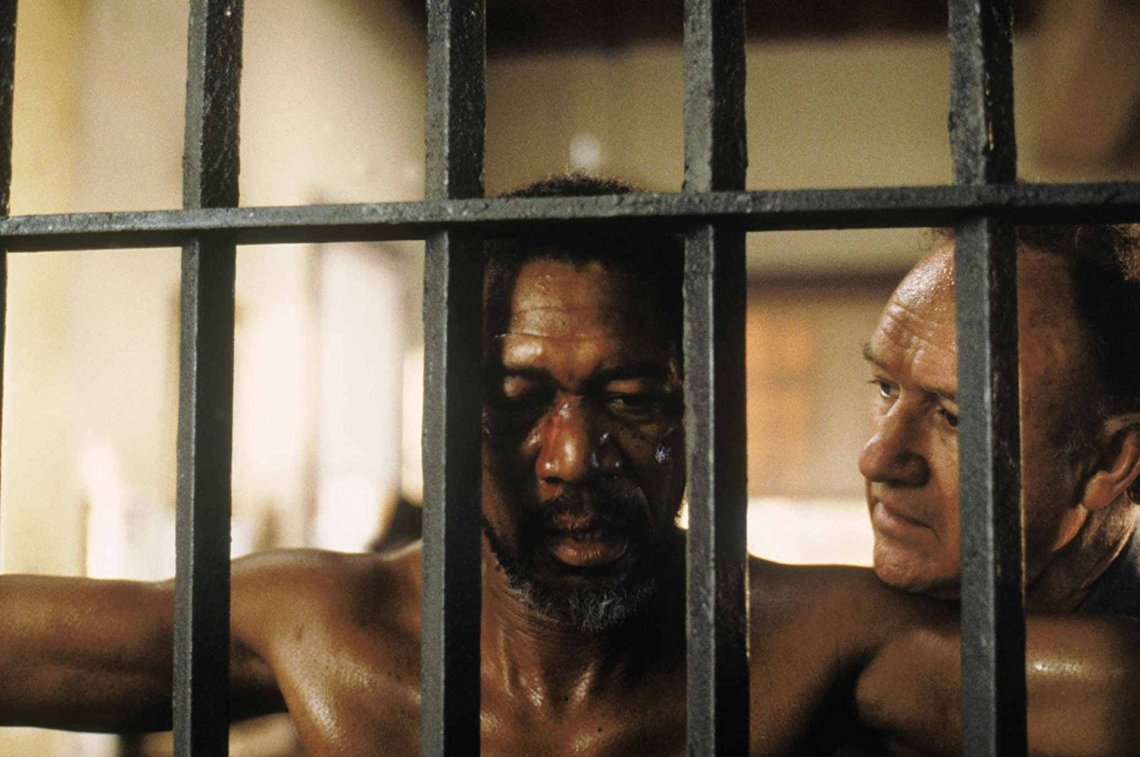 The west hijacked so many people, chewed them up, and spit them out dead over the years. Munnie is the strongest of all of us because he not only kept the west at bay, but he kept his brain from destroying itself. He refuses to just become another dead body buried in the sod. And that’s the beauty of Unforgiven; it’s both a story about and not about personal redemption that happens to take place in a harsh and brutal setting with harsh and brutal people. This film was nothing short of incredible and it’s one of the greatest westerns ever made. 1.

Bonus Points
I’ve giving this one a ten. I’ve been doing this a lot lately. Maybe I need to be a little more grouchy when I watch movies.
Final score: 10/10

Final Thoughts
That pesky thing called life is catching up with me at the moment. So I’m taking a break next week. I hated to split up the two Eastwood films on this list, but I’ve got to do it.

View all posts by Keltin